FAQ: Which actions change the latest activity of my deal?

This article shows you which actions have an impact on the ‘latest activity’ of your deal. 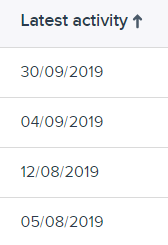 This date changes when:

In summary it's pretty much every single thing that is added to the tracking (manually or automatically) and that is linked to a deal. Note that the same column ‘Latest activity’ exists on company level. It works exactly the same as on deal level, but only for notes that aren't linked to any deal.

Events that are not considered as 'activity' on the deal and thus won’t change the date field are changes to any of the deal properties:

The colour activity of the deal, which you can read more about here, changes to light blue when you plan a task/call/meeting in the future.

Send feedback
Sorry we couldn't be helpful. Help us improve this article with your feedback.